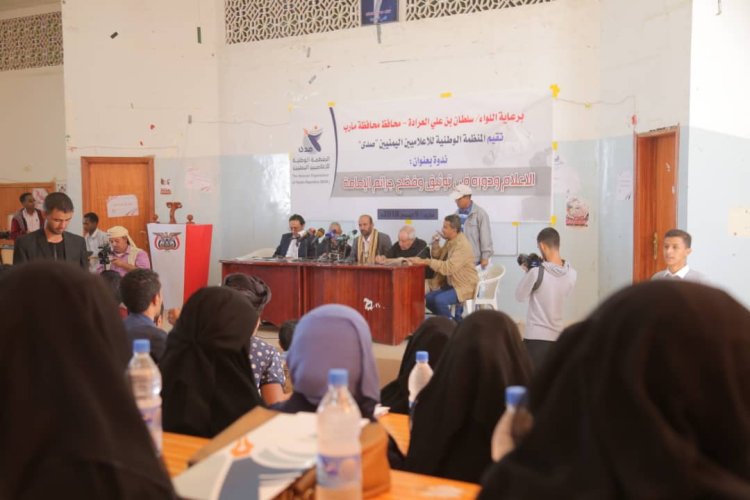 Sada Organization conducted a seminar on "the media and its role in documenting and exposing the crimes of the Imamate", in the presence of the head of the Department of guidance counsellors, General Muhsin khosrof, and Secretary-General of the Nasserist popular unionist organization Abdullah Nouman.

In the opening of the symposium, Mairb Sub-Governor for Administrative Affairs, Abdullah Al-bakery referred to the importance of such seminars to expose the crimes and violations of Houthi militias against all segments of Yemeni society, confirmed that the legitimate leadership of the government seeks to achieve peace and stability.

In turn,the head of National Organization of the Yemeni Reporters "Sada" Youssef Hazeb, in his welcoming speech, called for international organizations, the United Nations and the world freemen to stand to put an end to the abuse, torture, and the repression of the Yemeni journalists, and to consider the file of them as humanitarian issue away from political use as Houthi militia does.

Patriot Major-General, Ahmed Abdel Rahman Garhash, presented a working paper on the role of the media in the Victory in revolution of September 1962 against Imamate, and talked about the initial media recording in Sana’a before the revolution, who was glorifying the imamate and obliterates its crimes.

The second paper presented by Dr. Mosli Bohibeh, addressed documenting and clarifying the fact of the battle currently waging it the Yemeni people which aims to restore the state.

The symposium concluded with two oral interventions by the head of the Department of guidance counsellors, General-Muhsen Khosrof, and Secretary-General of the Nasserist popular unionist organization, Abdullah Nouman, which they indicated the need to unite information efforts to expose the crimes done by coup Houthi militias against Yemeni people.