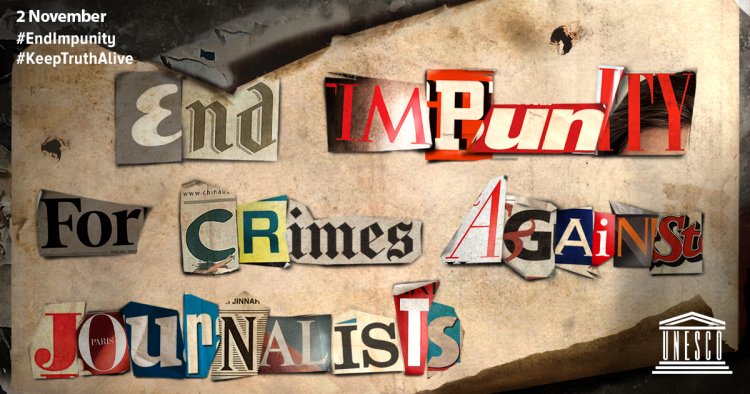 Today the world celebrates the International Day to End Impunity for Crimes against Journalists ( 2nd November), while journalism in Yemen is in very bad conditions and its risks are increasing due to the exemption of violators from the punishment .

More than 50 Yemeni journalists have been killed since the beginning of the country's current five year-long conflict .

While Journalists and media workers in Yemen have been subjected to numerous violations and abuses such as torture, abduction, arbitrary detention, enforced disappearance, threat and intimidation, with the war keeps persisting on and no legal accountability being held on the various parties committing the abuses .

According to the International Laws and United Nations Conventions, the killers of journalists and the violators of journalists' right, under no circumstances, shall never go unpunished. And everyone must respect and implement such laws, since the journalist is a truth seeker and the eye of the world and he is not taking side in the conflict nor involved in it .

Therefore on this occasion, the National Organization of the Yemeni Reporters( SADA) calls on the United Nations to :

To the parties in Yemen, the National Organization Sada demands :

-Immediate stop of all violations against journalists across Yemen .

-Release all kidnapped journalists held by all parties .

- Demand Houthi group to release immediately all the kidnapped journalists who have been held captive for five years and hold Houthis full accountable for the journalists' worsening health conditions .

Finally, Sada organization urges all journalists, media workers and human rights activists to unify their efforts to support the issue of the journalists and to expose those who practice abuses and violations against them .