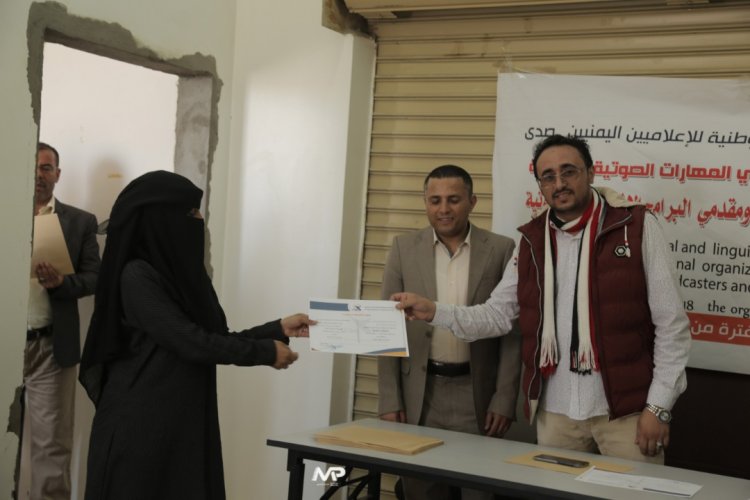 Today, Thursday morning the national organization of Yemeni reporters "SADA" concludes the course of vocal and linguistic skills for a number of journalists in Ma'arib.

17 trainee male and female broadcasters and reporters got benefit of this course during 21-25 October .

Head of organization Yousef Hazeb assures that sada cares about qualification and training that it has a direct influence on increasing the journalists ability and that will reflect positively on means of media.

And Hazeb expressed his thank and appreciation to media and journalists for their efforts to help and interaction to get benefit and success of the course, and he gave them a motivation to keep going in the organization' new activities in future.

He added that "we consider the care and interaction of the journalists and all workers of media as an indicator of developing the local media and its performance".

The manager of qualification and training unit Soha Almaweri praised the interaction and activism of the trainees and their passion to learn and get benefit of the trainers experiences and the activities of the course.

And miss Almaweri assures that the course achieved its gaols the primary evaluation indicates that trainees got benefit of the course to present programs, read news and reports, and the speaker's language.

In the conclusion of the course Sada org. honored the the team of trainers and members of trainees, and it also announced a new training programme will be held by the organization in a number of the republic provinces during the coming period.