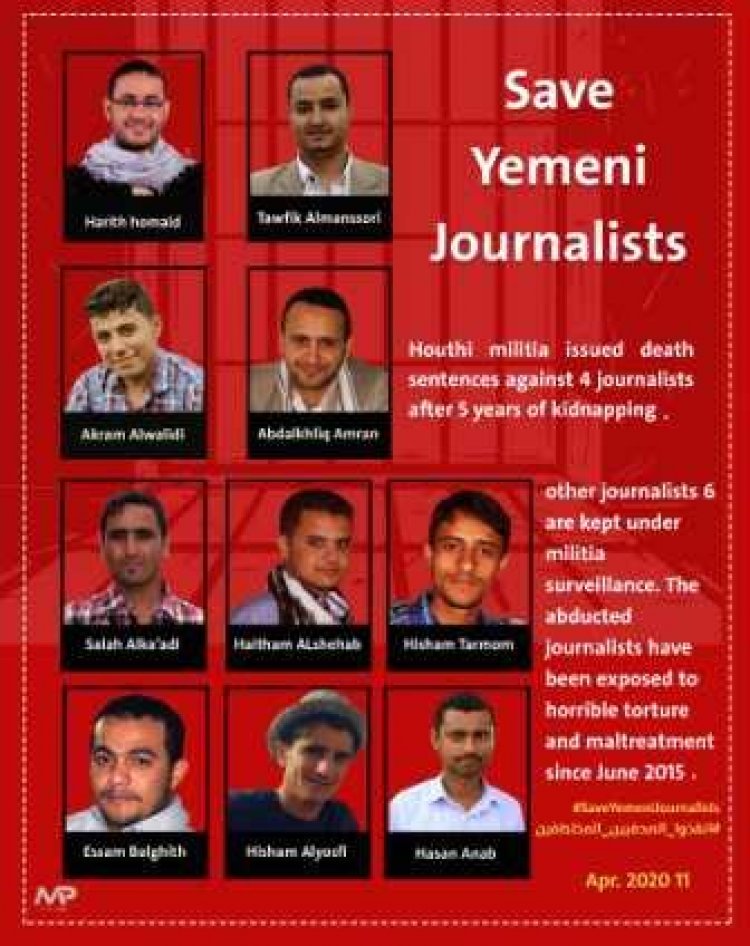 The National Organization of Yemeni Reporters ( SADA) has followed the recent Houthi-issued death sentence against abducted journalists who have been held in its prisons since 2015, and considered what was issued is "illegal" as per the Yemeni Law supported by provisions in international humanitarian law and all legislation protecting freedom of expression and the press.

SADA considers the verdict of death sentence issued by a dishonest judge and an invalidate court is a "horrific crime" committed by the Houthi group against the four fellows,AbdulKhaliqAmran, Akram al-Waledi, Harith Hamid and Tawfiq al-Mansouri, and against their families. This crime is added to the series of continued Houthi brutal torture for six years.

The verdicts against other colleagues also reveals the crime of "politicizing the judiciary" and using it to insult constitutional laws and provisions that criminalize kidnapping, torture, enforced disappearance, and the confiscation of freedom of expression and press.

The National Organization SADA highly appreciates the international and local positions rejecting these practices, and considers it an important step that calls for a high responsibility in the face of a serious threat to the lives of fellow journalists, especially since some of them suffer from serious illnesses as a result of the brutal torture they have been subjected to during the past few years

SADA urges all fellow journalists to join efforts and work hard until the release of all abducted journalists. It is not impossible since the family of journalist Yahya al-Jubehi could get him freed although the Houthi group issued a similar ruling against him in 2018.

The organization sympathizes with families of journalists' families who suffer a lot due to what their abducted sons in the Houthi prisons expose to for six years.

We call on all parties that inked to the Sweden Agreement to honor humanitarian laws, not to trade in the freedoms and pains of innocent people, and to stop political recruitment and extortion. It is time to release all abducted journalists and to prosecute all those who have committed brutal crimes against them and their families.