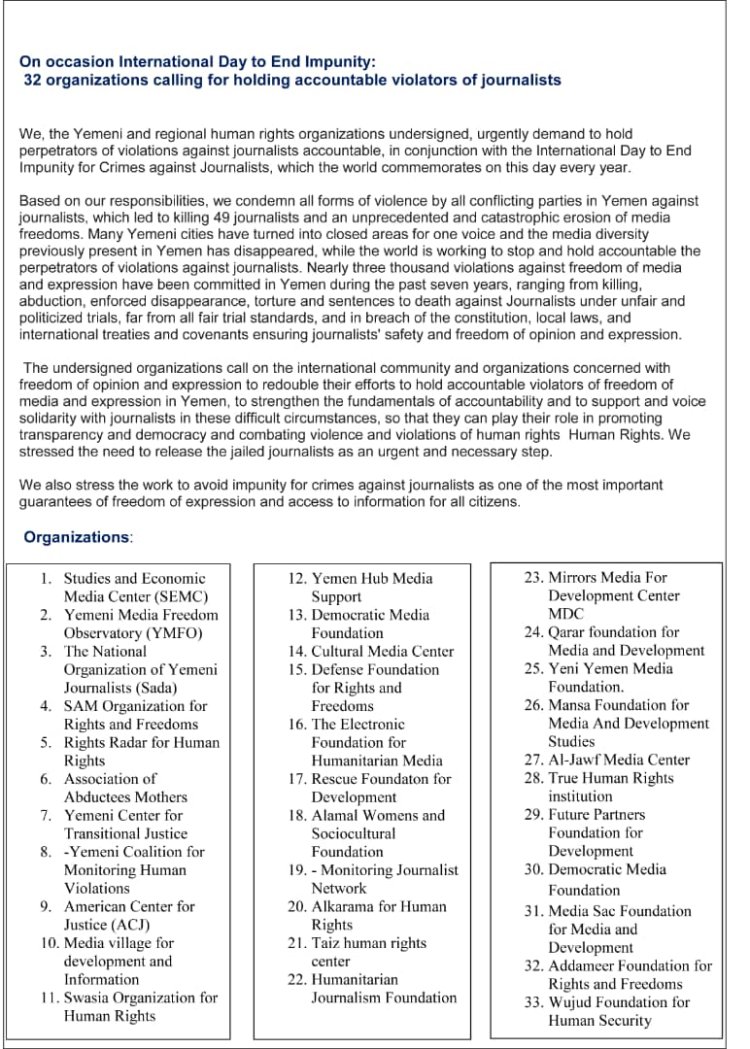 We, the Yemeni and regional human rights organizations undersigned, urgently demand to hold perpetrators of violations against journalists accountable, in conjunction with the International Day to End Impunity for Crimes against Journalists, which the world commemorates on this day every year.

Based on our responsibilities, we condemn all forms of violence by all conflicting parties in Yemen against journalists, which led to killing 49 journalists and an unprecedented and catastrophic erosion of media freedoms. Many Yemeni cities have turned into closed areas for one voice and the media diversity previously present in Yemen has disappeared, while the world is working to stop and hold accountable the perpetrators of violations against journalists. Nearly three thousand violations against freedom of media and expression have been committed in Yemen during the past seven years, ranging from killing, abduction, enforced disappearance, torture and sentences to death against Journalists under unfair and politicized trials, far from all fair trial standards, and in breach of the constitution, local laws, and international treaties and covenants ensuring journalists' safety and freedom of opinion and expression.

The undersigned organizations call on the international community and organizations concerned with freedom of opinion and expression to redouble their efforts to hold accountable violators of freedom of media and expression in Yemen, to strengthen the fundamentals of accountability and to support and voice solidarity with journalists in these difficult circumstances, so that they can play their role in promoting transparency and democracy and combating violence and violations of human rights Human Rights. We stressed the need to release the jailed journalists as an urgent and necessary step.

We also stress the work to avoid impunity for crimes against journalists as one of the most important guarantees of freedom of expression and access to information for all citizens.

- - The National Organization of Yemeni Reporters"SADA".

- SAM Organization for Rights and Freedoms

- Media village for development and Information

- Defense Foundation for Rights and Freedoms

- The Electronic Foundation for Humanitarian Media

- Qarar foundation for Media and Development

- Addameer Foundation for Rights and Freedoms