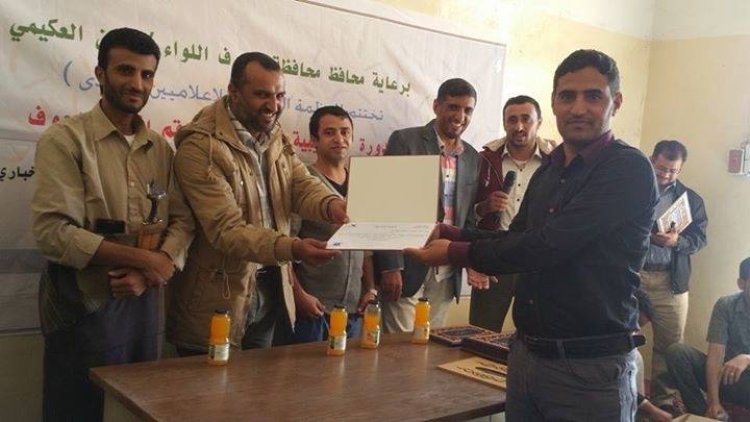 The training and Qualification course for the cadres of al-Jouf Radio was concludes in Ma'arib on 20 January 2017 which will be broadcast on the frequency 95.0.

The training course was organized by Sada org. under the auspices of the governer of Al-Jouf general Ameen Ali Al-Okaimi, it trained 11 trainer of the cadres of Al-Jouf Radio in all radio arts.

The training was on 10 days of in the studios of Ma'arib radio and Nass FM, in the arts of (preparation, presentation, sound, acoustic engineering, scheduling, archiving and directing)

Al-Jouf radio director Abdullah Al-Qutaibi said during the conclusion ceremony that the live broadcast will constitute a major media boost in supporting legitimacy and spreading awareness among inhabitants.

The radio of Al-Jouf began broadcasting last week, where it covered places inside Amran, Sana'a and sa'ada.

The establishment of Al-Jouf radio is an autonomous initiatve of the local authority in the governorate.

In the context of the community means development through which the leadership of the province seeks to develop awareness and instill ideas and values. also refuting deviant ideas and build constructive generation serving the country.

at the end of the ceremony, the participant of the course were honored, and also Al-Jouf radio, the Yemeni national organization(Sada) and the both Ma'arib and Nass FM for their efforts to organize the training course.