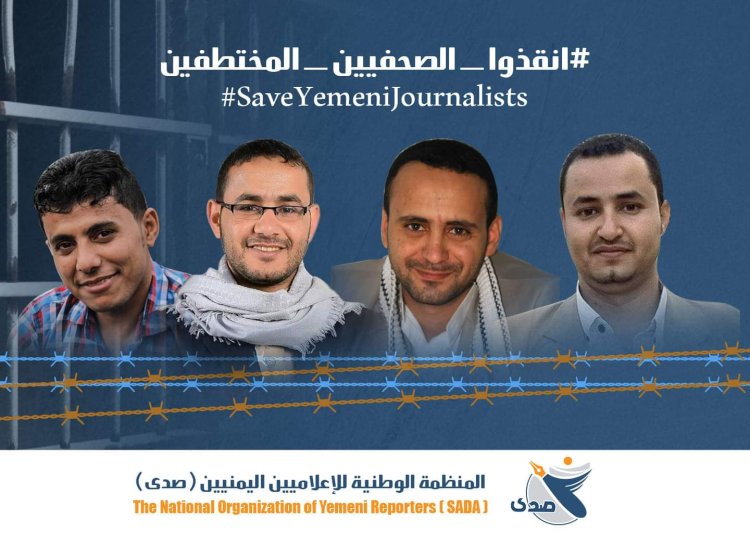 To the Special Procedures of the United Nations,

- Defa'a Foundation for Rights and Freedoms

Special Rapporteur on torture and other cruel, inhuman or degrading treatment or punishment: Nils Melzer

Special Rapporteur on the Promotion of Truth, Justice, Reparation and Guarantees of Non-Recurrence: Fabian Salvioli

The Working Group on the use of mercenaries as a means of violating human rights and impeding the exercise of the right of peoples to self-determination: Patricia Arias

This is an urgent appeal to the aforementioned UN Special Procedures to intervene, stop and cancel decrees of execution sentences against four journalists detained by Houthi forces. The Houthi group threatens to carry out the executions if the recognized Yemeni government does not respond to its conditions to exchanging the kidnapped journalists with their prisoners held by the authorities.

Since the beginning of the war in 2011, Yemen has been witnessing numerous serious violations that have targeted the fundamental rights of hundreds of thousands of Yemenis at the hands of the Houthi forces. However, the most serious development has been the adoption of death sentences against activists and journalists in previous years, most recently issued by the judiciary controlled by the Houthi group on March 19th, 2021, when the Houthi group threatened to execute four kidnapped journalists if the legitimate government refused to implement the group's demands to exchange the journalists with their war prisoners.

According to the organizations, the Houthi group abducted 10 journalists in 2015 from their homes and workplaces, forcibly hidden them and practiced physical and mental torture for six years, subjecting them to illegal trials on trumped-up charges that ended with the pro- Ansarllah Houthi's Criminal Court in Sanaa ordering the execution of a number of the journalists in April 2020.

The verdict included a decision to execute four journalists, and the conviction of the others, while merely holding them in detention.The Houthi group released five of those journalists following an. internationally- sponsored prisoner swap agreement with the Yemeni government. The Houthis refused to release the four journalists sentenced to death or exchange them with their prisoners fighters captured by the army on the front lines.

The four journalists, named Tawfeek al-Mansouri, Harith Hameec, Akram al-Walidy, Abdulkhaliq Omran, have been.l in the Houthi's prisons for the sixth consecutive year and under continued psychological and physical torture, amid silence and ignorance of the United Nations and its Special Envoy for Yemen in this regard.

The human rights and media organizations, who signed the appeal, express their rejection and condemnation for Houthi group's practices in blackmailing kidnapped journalists, and using them as precious card during negotiations with the government, without seeing any action taken by the UN envoy to Yemen, Martin Griffiths, or a clear position regarding the practices and violations of the Houthis against the kidnapped journalists.

We hold the UN envoy to Yemen responsible for ignoring the issue of journalists who have been kidnapped since he was assigned in charge of the Yemeni File, and for allowing the it ( journalists issue ) to be integrated inside the agenda of political negotiations, and transferring it into a card of pressure and political blackmailing.

The organizations also point out that the restrictions imposed by the Houthi group on journalists, activists and individuals violate the Universal Declaration of Human Rights and the International Covenant on Civil and Political Rights, and it represents a violation to their obligations under international human rights law, in particular the right to freedom of opinion, speech and journalism work. It also violates the provisions of the International Convention for the Protection of All Persons from Enforced Disappearance, adopted by the UN General Assembly on 20 December 2006, which affirms that the practice of enforced disappearance on large-scale or systematically constitutes a crime against humanity.

The International humanitarian law and relevant international conventions oblige the Houthi forces and individuals to respect legal rules that have guaranteed protection for journalists, particularly human rights standards, which prohibited arbitrary detention, enforced disappearance, torture, right to a fair trial and that persons shall be arrested on the basis of a judicial decision.

Therefore, we, the signatories of this appeal, argue you to use your mandates and take urgent intervention, through an urgent appeal or statement demanding the Houthi forces to:

1- Quickly Intervene and work on immediate release of the kidnapped and illegally detained journalists.

2- Ending arbitrary arrests in Yemen and opening a thorough investigation to ensure an end to these practices, which violate Yemeni and international law.

3- To open a serious investigation into the Houthi group's practices within detention and arrest centres, such as torture and the use of force to extract confessions and denial of basic rights such as food, drink and medical services.

4- Ending the work of militias that are outside the framework of the law as well as state in Yemen.