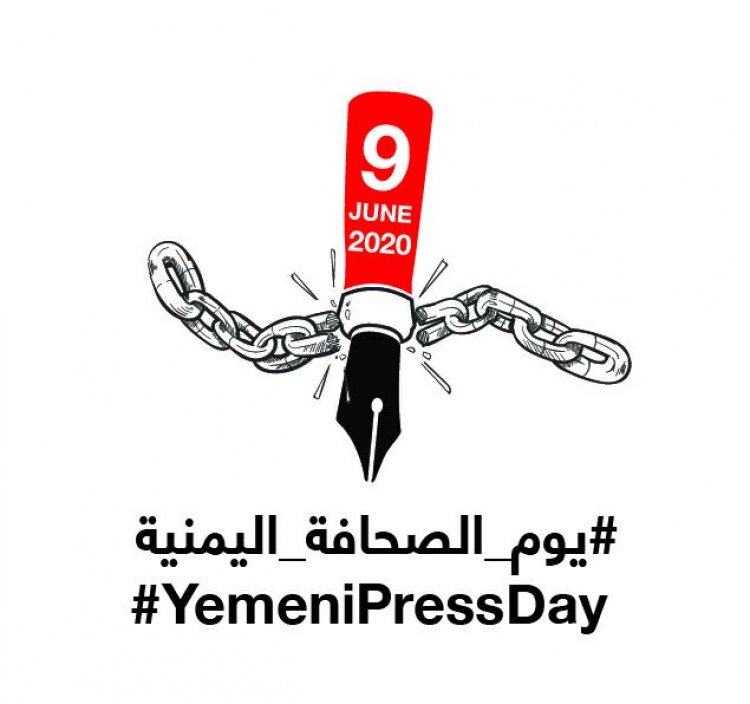 June 9 th coincides with the Yemeni Press Day, while Yemeni journalists are facing systematic campaigns of suppression and intimidation, which affect their right to life, freedom of expression and opinion and aim to mute their voices and deny them access to information and reveal the truth.

The undersigned human rights organizations express their solidarity with the Yemeni media and journalists in their ordeal, and recall on this occasion the tragedy of nine journalists;Abdulkhaliq Imran, Tawfiq Al-Mansoori, Akram Al-Walidi, Harith Hameed, Essam Belghith, Hisham Tarmoom, Hisham Al-Yousifi, Hassan Annab and Haitham Al-Shehab, who spend five years behind bars, for their role in exposing human rights violations, where they were abducted and imprisoned by the Houthis group.

The five journalists were abducted by the Houthis militia from a hotel in the capital, Sana'a, on June 9, 2015. On the other hand, many local and international human rights organizations, the International Federation of Journalists, the Yemeni Journalists Syndicate, have documented the brutal violations and torture these journalists have been subjected to in the prisons of Houthis group for the past five years.

On April 11 th, a Houthis-controlled court passed a null death sentence against four journalists: Abdulhaliq Imran, Akram al-Walidi, Harith Hamid, and Tawfiq al-Mansoori, and ordered the release of other journalists, after time served in prison. The unjust rules were received with rejection and condemnation by press and human rights organizations and defenders.

On the 5 thanniversary of the abduction of the journalists, we stand firmly with their families, and express our regret and sadness, for trauma, hardships, and psychological torture that children and relatives of journalists have been enduring for five years.Furthermore, we regret the indifference shown by all actors towards the humane calamity of the journalists, and in continuation of the humanitarian campaign that we launched to demand the rescue of prisoners from the threat of the Coronavirus, and following the outbreak of the pandemic in Yemen we reiterate our concerns and confirm the following:

We callon all parties, including Houthis group, the Yemeni government, the Southern Transitional Council, the Joint Forces on the West Coast, and all armed groups to immediately stop targeting journalists, harassing them and the media freedoms. We reject politicization, or exploitation of the cause of journalists, and express our regret for involving journalists in the prisonersâ€™ exchange deals by the parties to the conflict, which contradicts all international and national laws and legislation, human rights instruments, freedom of expression and the press, and is considered a serious violation that must stop immediately. We call for the immediate release of all journalists, unconditionally, and to hold parties involved in the torture and killing of journalists accountable and to be brought to justice. We all for the release and ensure safety of journalists Wahid al-Sufi who is forcibly disappeared for the sixth year by Houthis group in Sanaa, and Muhammad al-Muqri by Al Qaeda organization. We all for immediate investigation into the murder of the journalist Nabil Al-Quaiti, disclosure the findings, and to prosecute the killer, and to bring to justice and ensure no impunity to all murders of journalists. Express our solidarity with all Yemeni journalists who have been subjected to displacement, persecution, and grave violations, and we call on all sides to pay the salaries of journalists and provide them with required remedies We warn of the procrastination and delaying policies that have resulted in journalists remaining in torture and prisons for five years, and its disastrous consequence resulted from condoning the repression and human rights violations, and the absence of effective mechanisms to hold those involved accountable. We reiterate our appeal to release immediately all journalists, prisoners of conscience and all political activists in the various prisons and detention facilities of the parties to the conflict in Yemen, in order to save their lives, fearing the outbreak of the Corona pandemic in Yemen, and in response to laws, humanitarian principles, human rights treaties and freedom of the press. We announce the establishment of a follow-up committee to save the lives of all journalists, abductees and prisoners in Yemen.