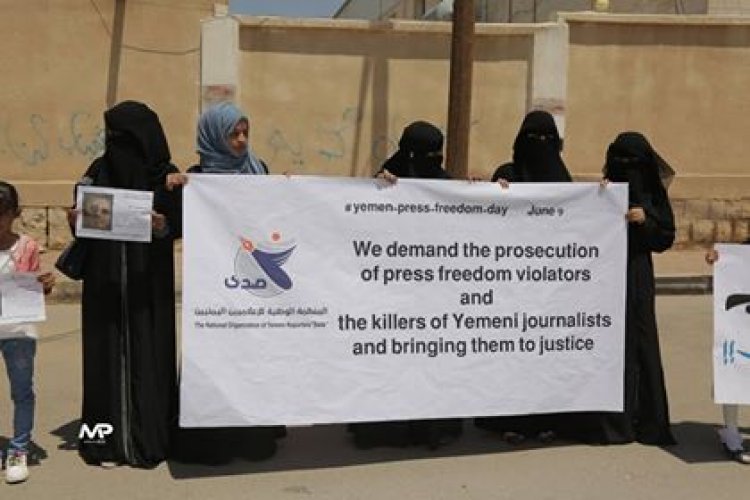 Twenty-four kidnapped and detained journalists have been in the prisons, including 10 journalists for five years, since the Houthi group abducted them on Jun 9, 2015.

Dozens of Yemeni journalists are imprisoned and many media outlets were confiscated. More than 40 journalists have been killed during the past four years only. Yemeni press still faces barbaric and systematic war, which has escalated by the Houthi group. The Houthis have committed more than 4280 violations against media freedoms during only last year, 2018.

Therefore on this occasion, the National Organization of Yemeni reporters (Sada) emphasizes the following :

We strongly condemn and denounce all violations against press and journalists, the continued war the Houthi group has been waging on journalism and freedom of opinion and expression and ongoing abductions of journalists, writers and activists by the Houthis.

We demand an immediate and unconditional release for 24 kidnapped and detained journalists, fairly compensate them for the years-long deprivation and brutal torture they have suffered.

We totally reject politicizing the file of kidnapped journalists and stress on their pure humanitarian issue. We hold all different parties responsible for the consequences of using the abducted journalists a bargaining chip in the negotiations.

The organization calls for prosecuting perpetrators of abuses targeting journalists, and ensuring they don't escape punishment to guarantee media freedoms and rights.

The Organization calls on Yemeni government to quickly pay salaries of journalists and media staff working in official institutions, and compensate institutions affected by the war.

We call on the international community led by UN and its Secretary General, and human rights organizations to pressure Houthi group to release all abductees in its prisons including the 10 journalists who have been kidnapped for four years.

The organization calls on legitimate government and Arab coalition to take necessary measures to ensure the released of journalist Mohamed Qaed Al-Maqri who has been kidnapped by Al-Qaeda since 2015. We also call them to boost freedom of media, opinion and speech, and stop irresponsible practices and intimidating inflicted by some journalists in the liberated provinces.

Sada urges all journalists, media professionals and institutions in Yemen to joint efforts and work at high pace to defend press freedom, strongly pressure until their fellow kidnapped journalists obtain their freedom.