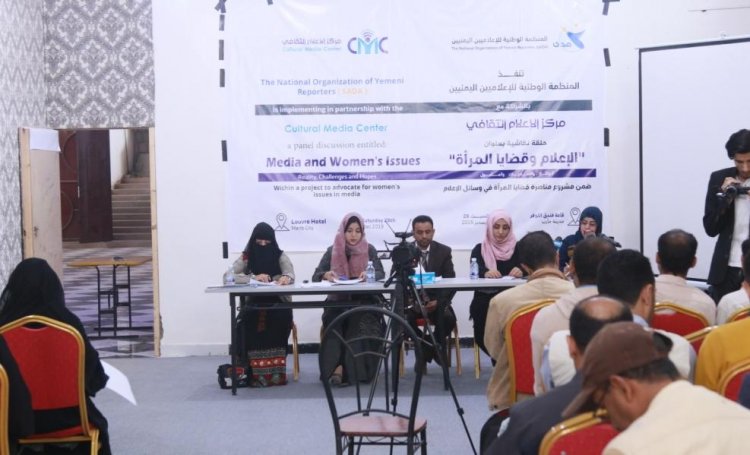 The National Organization of Yemeni Reporters, SADA, in partnership with the Cultural Media Center, CMC, organized on Saturday in Marib city a seminar on media and women's issues which focused on Reality, Challenges and Hopes through research papers and joint discussions contributed by media reporters and representatives of civil society organizations.

During the opening of the seminar which organized within a project to advocate for women's issues in media, the Chairman of Sada organization Yousef Hazeb welcomed the attendees, stressing that women's issues don't receive the required attention in the media outlets.

Hazip confirmed that Sada organization is interested in the social gender and therefore it has put the issues of women within its main priorities.

The Deputy Ministry of Youth and Sports Nadia Abdullah, representatives of civil society organizations, activists, and journalists attended the seminar which discussed, through three research papers, a number of topics related to women's issues and the role of media in their handling and coverage.

The paper concluded with a number of recommendations, including coordinating efforts in cooperation with donor organizations to build capacities and overcome obstacles that prevent women from integrating media issues, in addition to the need to build institutional capacities for media institutions to meet the aspirations of women and advocate for their issues, and the importance of allocating programs for academic qualification in the fields of media for women, and to hold series of workshops with the participation of media to produce a joint working document to advocate for women's issues.

The second paper, entitled the attitudes of journalists and media reporters in covering women's issues was presented by Abdullah Al-Dhabyani, covered the necessity of training and qualifying journalists and developing their capabilities and skills in dealing with women's issues and raising their awareness of international laws and treaties in this regard.

It pointed out to the importance of raising community awareness regarding women's issues, respecting their rights, and empowering them through programs, projects, events and activities.

It also noted the need to create a comprehensive database or information system for receiving women's information as a source for journalists, recommending the General Administration of woman in Marib to conduct a field survey to collect information about the situation of women in the governorate as a reference for the media and interested parties.

The chairman of Marib Girls Foundation Yasmeen al-Qadi presented the third paper on the role of media in advocating for women's issues. She said that the media painted a negative image of women, especially in dramas, adding that the media is unable to keep up with the reality of women.

Al-Qadi called for empowering women with leadership roles in media institutions, and the necessity of qualifying female journalists in dealing with women's issues and affairs.

The seminar witnessed a qualitative attendance and extensive discussions on media and women's issues in addition to many interventions and comments that contributed to enriching the working papers.