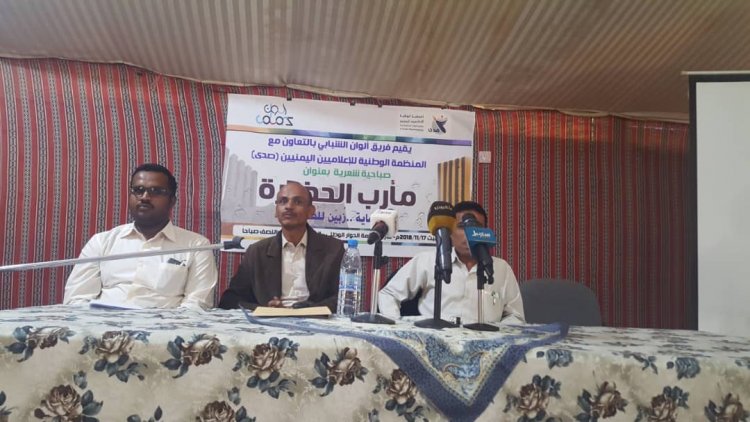 A morning lattice under the title "Mareb civilization" was held today morning, in the national dialogue tent in Mareb city .

The morning lattice which was done by Alwan team of youth with the national organization of Yemeni reporters, three poets participated one of them from Mareb, they showed their poems about Mareb and how it became a sanctuary for Yemenis of all parties even those who escaped because of war and violations.

In the event, director of the Culture Office Mr. Ali Baqlan as well as manager of book foundation Mr. Nasser Alshareeef presented a motivation word for the team and young people to continue this kind of cultural events... And they express their good impression that they will support youth in anything related to culture and poetry.

The poet who has the first prize in vertical poem in 2016 Abdulkarim AlAferi, showed his poem about Mareb and it's legacy and he didn't forget to mention the war in our country and how martyrs are sacrificed their lives to free Yemen.

And the poet Mos'ed Ekaizan, from Aljoba -Mareb described Mareb in his poem and its history and he said that liars say that Mareb is a place of terrorism because it is nowadays a safe place for all Yemenis .

The poet Mohammed Alhoraibi, described Mareb as a shelter for displaced people from hell of war and difficult situation of our country since years.

Said Bakeel Afeef manager of project in Sada org. that the organization help such kind of activities to encourage talented young people to improve cultural life in all provinces of Yemen.

Attendants also shared some poems of their own.